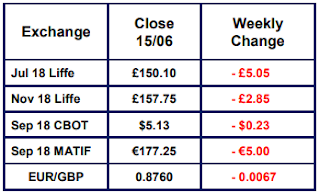 Markets down sharply on the week as supportive USDA data was quickly overlooked as attention returned to politics/weather. USDA headlines: 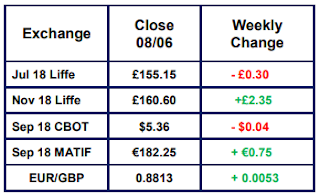 Markets mixed this week as Black Sea/US weather continue to occupy much of the trade focus. 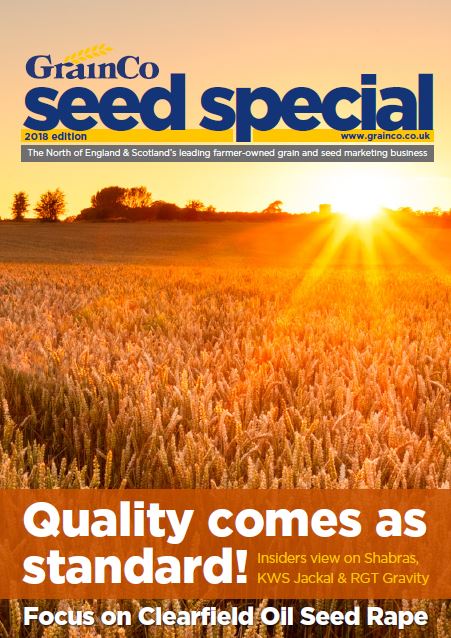 Welcome to the 2018 edition of the GrainCo Seed Special Publication.

Within its pages you will hear about GrainCo's care to ensure that our seed quality continues to exceed industry standards and remains proudly black grass free. In addition find out about the dates for your local GrainCo variety demonstration sites, which range this year from North Yorkshire to Fife in Scotland.

You can find the latest variety information on all of the leading wheat, barley and oilseed rape varieties, including Clearfield, seed treatments and fertiliser timings.

To down load your copy click here. Enjoy the read. 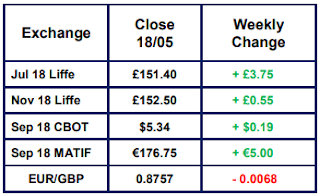 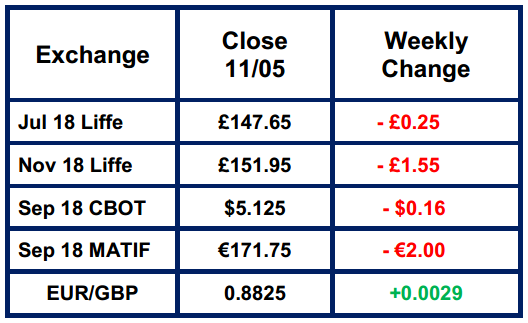 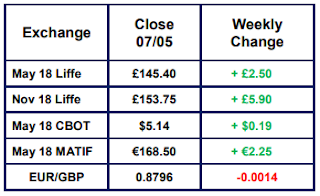 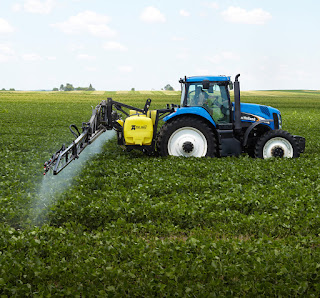 Finally, a more settled spell of weather over the last two weeks has seen a huge amount of activity in our region with farmers desperate to catch up with drilling, fertiliser application and spraying.  Most spring cereal and bean crops on light and medium bodied land have now been drilled, with only the trickier, heavy land remaining. I am often asked how late spring barley can be drilled; the answer completely depends on individual conditions at the time, all I will say is that many customers I deal with harvested successful spring barley crops in 2016 that weren’t drilled until May.

The last month has also seen an advance in old crop prices. May’18 feed wheat is currently trading between £154-£156/t, with those willing to hold on until July/early August likely to make £160/t. This is down largely to the re-opening of the Vivergo plant in Hull, furthering the demand for feed wheat in a region already in deficit. Moreover, dwindling on-farm stocks and the sense that harvest is certainly not approaching quickly is not incentivising many people to sell.

New-crop is remaining fairly level with values trading at £144-£146/t and £149-£151/t for harvest and November respectively. Most regular forward-sellers have likely taken cover at, or near, these values and until either markets move upwards or crops markedly improve, it is unlikely that many people will be enticed to sell much new crop at these current levels. Few growers in the region would at this point imagine they are heading towards a bumper harvest, especially with the condition spring crops have been drilled in (or not drilled!). If at least one of Ensus or Vivergo is running throughout the back-end, demand for feed wheat in the North will remain strong, and so unless the pound strengthens significantly, values will remain relatively firm.

Old crop feed barley has continued its meteoric  rise, now virtually at parity with feed wheat depending on location, and only £7-£8/t less than full spec milling wheat! Whether the demand for barley will reduce as farmers turn stock out remains to be seen over the next few weeks, however with very little left on farm, prices are unlikely to nose-dive. New crop barley also looks more attractive, with forward prices £10-£12/t below wheat, but again you would imagine a lot of next year’s trade will hinge on how well spring barley crops perform.

Oilseed Rape (OSR) continues to be the dog of this marketing year; old crop values remain at £284-£286/t (depending on location) and are seemingly range-bound to a maximum of around £290/t. It seems at this point as though OSR has run its race, with large imports in the winter meeting the demand from the UK crush. One can never rule out a late rally but it certainly feels unlikely at the moment. New crop values are equally uninspiring; £286/t for November, with harvest £10/t less, is hardly likely to induce much forward-selling at this point.

Fertiliser markets are gearing up for the new season trade to begin, with prices for AN and Urea expected in the next month. That said, there are still reasonable old-season offers available for those with purchasing still to do. Imported AN is some £23/t cheaper than UK product at the moment, with May delivery at £219/t and NPK products, such as 20.10.10, still available at £245/t.